An Electric Car, Some Monsoons, and a Life Lesson

Talk about a fun day! I was offered a chance to drive the new Chevy Volt, an electric car with a battery range of 50 miles and a gas range of upwards of 400 miles, from Los Angeles to San Diego, a gorgeous drive down the Pacific Coast Highway (when it’s not pouring) thanks to the awesome people at General Motors.

I jumped at the chance – When else would I get a chance to drive a car before it hits the market?

I was also fortunate enough to drive with a gentleman I met today for the first time and with whom I immediately became best friends – Ed Ugel, author of the new book “I’m With Fatty,” a wonderful and hysterical story about Ed going through a massive diet and exercise program to lose a ton of weight.

Meeting Ed in the lobby of the Courtyard by Marriott was like meeting a grayer-haired version of me. Within five minutes, it was blatantly obvious that we not only shared the same sense of humor, but the same love of food, and quite possibly, the same brain, as well. I knew we were going to have a truly awesome trip and probably create a friendship for life.

We met Brad Busboom, a Project Manager from General Motors, who’d be our guide (read: Chaperone) for the entire trip. Brad turned out to be 24 years old, while Ed and I were a ripe old 38. I have no doubt the majority of conversations Ed and I had over the four or so hours we were driving scared the living hell out of poor, young Brad, and he’s now running to find some serum that will prevent him from aging.

I should give you a second of background on how Ed and I met. I was in some hotel a few months ago, playing with my new iPad, and looking for a new book to read. Somewhere on the iPad library store’s list of books was “I’m With Fatty.” Having struggled with my weight most of my life, I immediately downloaded it, and within a day finished it. It was awesome. One of the funniest books I’ve ever read dealing with weight loss, and hell, just one of the funniest books I’ve ever read in my life. I can’t recommend it enough.

I immediately found Ed on Twitter and dropped him a note complimenting him on the book. A mutual follow, well, followed, and we started talking. I eventually asked if I could interview him for my blog (to be posted soon) and he agreed. During the interview, he said he was going to be out in LA the same time I was, and I invited him on the Volt drive. This is important for a reason later.

So this morning, The Volt showed up around 8:30, and Ed and I hopped in. Right away, I knew it was going to be a funny trip, as Brad from GM told me that I was driving, and Ed had to sit in the back, (GM rules.) Ed’s response: “Do GM’s rules prevent me from tying you up in the trunk?”

We pulled out of the parking lot, and the first video was shot.

By the time it was over, we knew this was going to be a ridiculously fun trip.

The Volt itself was a BLAST to drive. First off, you turn it on, and nothing happens. Well, the car turns on, the two screens come to life, and you know the machine is on – It virtually breathes electricity. But there’s one thing missing from your typical automobile:

There’s no noise. It’s silent as a library.

Once you get over that, you gingerly put the car into drive, and it’s like someone kicked you in the ass. You’re gone. You feel the car moving, and yet it’s still silent. It’s weird – But awesome.

Getting on the highway, you really feel the power of electricity. This car hauls ass – One tap on the accelator, and we were blowing past a semi doing 70. When Ed and Brad stopped screaming, they agreed with me.

One cool moment was when we ran out of battery power, and the Volt seamlessly switched to gas power – We didn’t even notice it:

We had no choice but to stop for food around 10:30 – We were all starving. I asked Ed, the healthy, “I just lost a ton of weight and wrote a best selling book about it that’s going to make me millions” guy, a simple question:

“Good,” we both said, as I pulled a u-turn (The Volt makes an awesome u-turn) and barreled right into a Carl’s Jr. for some humongous burgers.

Getting back on the road, we made pretty decent time, even during a monsoon.

Finally hitting San Diego, we actually had a little bit of free time – So we cruised around Coronado, home of the US Navy SEALs. I’ve always had a bit of thing in my heart for the Navy SEALs ever since taking a two week bootcamp taught by a former SEAL. (Hoo-ya, Instructor Walston!) So it was nice to see where they actually train.

During the few moments when it didn’t rain, it was actually a pretty nice day, weather-wise! 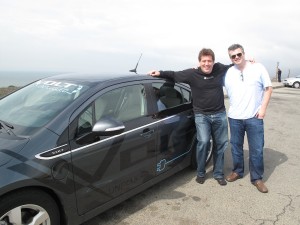 Me and Ed – Two former Fatties.

Working our way back, we dropped Ed off at the train station, then Brad dropped me off at San Diego Airport. What an amazing day, in a spectacular car.

When my lease is up on my Infiniti this summer, I think I might actually get one. Not even counting the spectacular tax credits you get, we did something like 150 miles on 2.4 gallons of gas. We got about 42 miles to the gallon while using gas, and of course, no gas used while we used the battery.

Think about it – I live in NYC, and rarely use my car anyway. If the majority of my trips are to the drop zone (70 miles away) BJ’s Wholesale Club (12 miles away) and my parents (11 miles away) I could possibly go through the entire car lease ($350 a year, btw,) and never have to buy a tank of gas. That’s amazing. That’s truly, truly amazing.

Here’s the life lesson part. Someone emailed me after I put the photo of me and Ed up online – They said, “How cool, how did GM manage to get him to go with you?” I answered, “they didn’t, I asked him.” They were confused, since I said it was the first time I was meeting him.

I said simply, “Because I made it sound like fun.”

I’d be willing to bet that we don’t do 90% of the things we want to do because we’re too afraid of the outcome, so we never try.I emailed Ed after I finished reading his book, and we struck up a conversation. When we both realized we’d be in LA the same time, I invited him to come. It’s really that simple.

Do what you want to do. Worst that can happen, is someone says no, to which you’ll figure out another way. But chances are, they might say yes.

Thanks to Chevy, Brad, Chris Barger, my new friend Ed, and the kick-ass Volt! What a fun day!

Comment to me – The Volt: Would you buy one? Why/Why not?