The following is an open letter from the “me” of today, to my high-school self, with the hopes that someone out there reading this now has a kid who’s as confused today as I was back in 1987, and it helps them.

How’s 1987? If I remember correctly, you’re a sophomore at LaGuardia High School of Performing Arts. If memory serves, you’re not very popular… In fact, I’m pretty sure that’s an understatement. You have like, one friend. Maybe. Part of the reason might be because you’re running around with your Walkman on listening to Huey Lewis and the News. Even just saying that now sounds horrible – I can’t imagine what you must be like in real life in 1987. Trust me – It’s nothing like what you believe you’re like. It’s a lot, lot worse.

BUT: Don’t worry – I’m here to tell you that it gets a lot better. I’m turning 40 this coming Monday, so I think it’s high time you and I had a chat. Well, technically, I’ll chat, you’ll listen, because you’re in the past, and anything you want to say I already know, but hear me: You’re going to get a lot better. You’re going to do just fine, although nothing will ever be done about your musical taste. You’re actually going to see Huey Lewis and the News live at a computer trade show in Vegas in early 2002 and dance like a complete spaz the entire time. But whatever… Some things are even out of the hands of time-traveling letter-writers. But the rest… Well, here are some guidelines for you.

First off, you have to understand – You’re hyper, you’re wacky, and you tend to talk when you should be listening. I know you go home crying a lot because your mouth tends to get you in trouble. Well, it does get better, because in the next 25 years, you learn to listen. I’m here to tell you to start earlier: Your mouth, the thing that is the source of your biggest problems now, will actually be your best resource later in life, when, if you can believe it, people pay you to talk. But that doesn’t give you (now or back then,) a license to talk all the time! LISTEN TO ME: You’re going to NEED to get better at learning to SHUT THE HELL UP A LOT MORE THAN YOU DO IN 1987. Learn to do this sooner rather than later. I work now in something called “digital marketing.” (Don’t ask, it’s mostly bullshit.) The thing is, most people in digital marketing talk way more than they should listen. If you can learn not to do that earlier than most, you’ll be better off. Listening gets you a lot more. You learn a lot from the other idiots who won’t shut up. You get to know what’s going on because you’re actually listening. Oh, and it makes you mysterious. If you learn to listen now, I promise, it won’t take another two years before Janice Murphy finally goes out with you. (More on her later.)

In the next ten years, (before 1998) you’re going to realize that just because everyone tells you that you have to graduate, get a job, and be miserable, because that’s what’s “supposed” to happen, it’s not really true. You’re going to stop working for other people in 1998 and go out on your own. and in one of the scariest years of your life, you’re going to risk it all, and it’ll pay off: You’ll never feel like you’re “working” another day in your life. The lesson here: Nothing good ever comes out of staying in your comfort zone. You’re going to appreciate this lesson countless times over the course of your life. Future glimpse: You’re going to wind up enjoying falling from great heights out of planes with nothing to save you but some fabric and some string.

You’re going to learn that sometimes, doing the job no one wants, volunteering for the assignment no one likes, or even becoming friends with the person everyone else avoids, is the best thing for you. Hard work is good for the soul, and there’s nothing wrong with being thought of as dependable. Also, that kid no one likes but you’re friends with? His mother works at a company that just started, called America Online. He’s going to give you a disk in the next eight months. I urge you: Insert it in your Macintosh SE. What happens between you and AOL will set you on your life course that you’re still living in 2012. It’s going to be awesome. 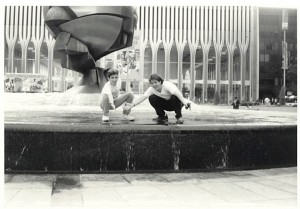 Embrace this building while you can, as well.

You’re going to learn that being honest is the best policy. A lot of things are going to happen in the world in the next twenty-five years that are going to make lying much, more difficult. From video cameras in every phone (understand – pretty soon, you’ll be carrying your phone with you, and they won’t be connected to walls) to devices that track where you are in real-time, all the time, the ability for anyone to lie in 25 years will be almost nil. So do yourself a favor now and start telling the truth. It’ll save you a world of hurt in the future, even if that hurt is just feeling stupid when you’re found out.

Peter, let’s talk about some serious stuff for a second:

Up until now, you’ve never “run” in your life, unless it was by pressing “x” on your Nintendo. You look at gym class as “something to get out of,” as opposed to something you should do. I get it. But I’m here to tell you that you need to rethink that. You know how you stop at Sbarro’s Pizza every afternoon after school? Let me tell you, the only thing keeping you from turning into a house by the time you’re 18 is your youthful metabolism and the fact that you’re in NYC so you walk everywhere. Neither of those things will last. Start eating healthier today. You’re going to be fighting your weight all your life. Start working on it now. And by the way – You won’t believe this now, but in 19 years, you’re going to run a 3:58 NYC Marathon, and it’ll be on the best moments of your life. Make sure you enjoy that.

This is probably the hardest thing to say to you, but also probably the most important: Peter, you don’t know it now, but you have an incredibly addictive personality. You don’t drink now, which is good, and you won’t drink at all throughout college all the way through your twenties. But when you’re close to 30 or so, you’re going to be running a PR firm, and you’re going to have clients who want you to take them out drinking. You’re going to find that you like drinking, and you’re going to find that, while you can go for months and months at a time without a drink, when you do drink, you occasionally exceed whatever your limit should be. This is an addictive personality, Peter, and it’s not something that can be cured. It’s something on which you’re always going to have to work. It’s a sleeping dragon in you right now. I’m just letting you know that at some point, that dragon is going to awaken, and when it does, you’re going to have to constantly tame him. I have no doubt you can do it, but know that it’s going to be a battle you’ll be fighting for the rest of your life. Keep an eye on it from day one, and never let it get the best of you.

A few more things, Peter. And by the way – I can’t give you stock tips or tell you who’s going to win the World Series for the next 25 years. (I can tell you this, though: 1986 was a fluke. Don’t bet on the Mets. They’ll just keep breaking your heart.)

You’re going to find out, in about 18 or so years, that you have something called “ADHD.” It’s not a disability, it’s an ability. It means your brain runs faster, and at a higher RPM level than most people’s brains. And once you learn to manage it, it’ll be an awesome, awesome thing. Get ready to enjoy it. You’ll be happy you have it soon enough. Right now, it’s the reason you seem to constantly get into trouble. It’s just because other people don’t know how to handle your brain yet. Chances are, they never will, but you’ll learn how to make that work to your advantage, too. Tons of other people will do the same thing, and we’ll realize that ADHD is actually awesome, if used correctly.

This is for the times when you go home and write in your journal (the one Mrs. Glassman is about to give you because she thinks you’re a good writer with potential) about how you’ll never get a date or a girlfriend. Let me tell you something, kiddo. Both those things couldn’t be further from the truth. In High School (especially LaGuardia,) it’s all about looks. As you get older, that changes. The personality you have in you, the one you’re refining and making better every day, will shine through in about eight or so years. And when it does, believe me, Peter, you’ll have your pick of them.  (Tip: You’re not going to marry Kristen from college, but in a completely random twist of fate, it’ll be one of her coworkers, about twenty years later, and that’ll probably drive Kristen crazy until the day she dies.)

Three more pieces of advice, then I’ll let you go, since my plane is landing. (Oh yeah, you wind up spending a good portion of your thirties on an airplane, and it rocks.)

First: Keep doing your own thing, no matter what anyone else says. I know it sucks when you’re not part of the “cool crowd,” and I know how often you go home wishing you had friends and people who liked you. But check this out: It’s the people who do their own thing, who don’t follow the crowds, and who listen to their hearts – They’re the ones who are wildly successful. Remember what our friend Rebecca wrote in our Junior High School autograph book? “Just keep doing your own thing?” She knew what she was talking about. Oh, and by the way, Rebecca turns into a TOTAL hottie when you reconnect with her in about 22 years. Just an FYI.

You’re going to continue being close to mom and dad, which is cool. You’re going to get into some RIDICULOUSLY loud fights over the next ten years – Especially when they catch you smoking senior year of high school – If you can avoid starting to smoke, it’ll be a lot easier than trying to quit. But either way, try and remember that mom and dad really do have your best interest at heart – By the time you’re in your early 30s, it’s gonna be good – You’ll have a great relationship with them. But mom will always worry. That’s not going to stop. (Wait until she finds out you took up skydiving. She’ll spend a week not talking to you, claiming that you’re selfish and don’t care about anyone else. But she’ll come around.)

PS: You and Janice Murphy are going to have an incredible summer together after your senior year. But try and keep in better touch with her, because I have absolutely no clue as to what happened to her or where she wound up, which is sad. I’d love to find her again and say hi.