A Good, Non-Anonymous Change For HARO

Shiny Ball, ADHD Version for people like me: The “Anonymous query” feature was being abused way too much by those who didn’t need to be anonymous, and hurting the quality of the source responses, so we’re removing it. If you still believe you have a reason to be anonymous (major media, breaking news,etc.,) you can still be anonymous in a different way, until our sources disagree – then we might take action.) Bigger explanation below.

(A somewhat long read, but worth 2 minutes out of your morning coffee if you read the HARO.)

One of the things I ALWAYS mention when I talk about HARO and how we’ve grown as fast and as well as we have is that simply, we LISTEN to our audience – Our members, our reporters, our sources, we LISTEN when you ask for things. And if enough of you ask for the same thing, we listen to our audience. We know that in the end, our AUDIENCE dictates the flow of our company – not the other way around – If we ever start believing that WE dictate the flow, and not our audience/members/sources/journalists, we’ll be out of business in a heartbeat.

So… With that said – We’re making a change to HARO. Nothing major, but something you should all know about.

One of the big things we implemented when we switched to HARO 2.0, as it were, was the ability for masked email addresses from reporters. That meant that joeblow@nytimes.com now became x123a14@helpareporter.com, and when their query expired, so did their email.

This was met with a resounding cheer from both journalists and even from sources, who understood that we were doing it to virtually eliminate spam – And it worked – We’re the largest source repository in the world that does NOT spam reporters – If someone spams a reporter, one of two things happen – They do it while the email address is still active (within deadline) and they get reported to us and banned from HARO for life, or they do it after the email address has expired (after deadline – otherwise known as “harvesting emails”) and it doesn’t matter, because that email is dead, and will never link to the reporter again. Everyone’s happy! Of course, as Biggie Smalls once said, “Mo good HARO, mo problems.” (No, seriously, that’s what the original lyrics were.) Anyhow, we’ve run into a similar situation:

We have a “rating system” as it were, for who can use HARO from a journalist side. Either you’re a reporter or freelancer from a major media organization, or, you’re someone “known” to us with a minor org – i.e., if you’ve used HARO before for the NY Times, and are now freelancing for a small blog, we trust you, and we’ll let your query run. If you don’t fit into either of those categories (i.e., we’ve never heard of you, or we don’t recognize the blog,) we go to one of the top industry standards, Alexa, and we determine how many other people know of your blog. Suffice it to say, if no one’s ever heard of you, chances are, we won’t burden our HARO members with a query to help “fill pages” for you – That’s not the purpose of HARO.

And with this system, all has been good. 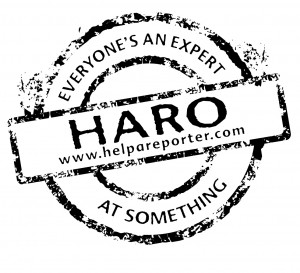 The most known logo for journalists and sources… EVER.

Except for one minor thing…

Sometimes, people have been sort of… “abusing” the “anonymous” feature we’ve had on HARO. See, before we had the masked emails, we had an anonymous feature for top level reporters (say, major papers or TV news outlets) who didn’t want their emails shown for fear they’d get slammed or email harvested, or because they didn’t want to let their competitors know what they were doing. And it made sense – If they wanted an anonymous email, we simply created a subject line specific query, and used a Google email account (helpareporter or helpareporter1) to auto-forward to their address. Everyone was happy.

When we went to auto-masked emails for everyone, we left the anonymous feature in, even though, since all emails were masked anyway (joeblow@nytimes.com became 123ed456@helpareporter.com, etc.) we technically didn’t need it.

That’s where the problem came in. Journalists started checking the “Anonymous” button more than 50% of the time – and most of the time, it was people who didn’t “need” to be anonymous in the first place – i.e., small blogs, independent media outlets who had no need to be anonymous other than “it seemed logical to do.”

Now we get it – We get the “cloak” that HARO provides – Hey, submit a query to 135,000 people without revealing your name, and people will respond to you on the off chance that you’re top-level media – and you win. Problem is, that doesn’t work forever.

In the last few months, the responses to “Anonymous” checked queries have dropped by over 50% – Which means that sources, be it agency, small or large business, or regular person, don’t want to share their expertise without knowing who they’re sharing it with.

And get this – We totally and completely understand that, and we support that opinion!

I wouldn’t want to tell a “reporter” about how I started HARO unless I knew it was a “reporter” and not a “competitor” with a “blog.” (Waaaay too many quotation marks in that sentence.)

So… Starting Monday, May 10th, 2010, HARO is eliminating the Anonymous checkbox for reporters.

But WAIT AND TAKE A DEEP BREATH, TOP-LEVEL REPORTERS. That doesn’t mean you still can’t be anonymous when you submit your queries!!

Remember – Emails are automatically masked – and always will be. So if you’re one of the top-tier media outlets who never shows who you are, we’re not taking that away – Simply enter “Reporter” in the name box, and “Top-tier Outlet” in the outlet box” – We’ll see your regular email address when we edit your query to run, and if you fit the “reason to use anonymous” logic, we’ll let you go through.

But here’s the kicker, for those who were abusing the system, and didn’t have a valid reason for anonymity – We’ll still let you do what those reporters with a good reason are doing above – for now – you can enter something other than your name and outlet, and we’ll let you run – again – for now – but – if our audience comes back to us and says “Hey, that anonymous outlet was some guy at a PR firm who had a blog and went anonymous so other PR firms would give him info” or similar stuff, we’ll shoot you an email and let you know you can’t do that again – then we won’t let you.

Make sense? At the end of the day (and I know – we all hate that term…) There are certain journalists who have worked hard enough to enjoy the protection that an “Anonymous query” affords them. And we’ll continue to give them that protection. But it’s not for everyone. And we’re not the only ones playing judge and jury here, guys. It’ll come from our audience – like every change and new implementation we’ve ever made on HARO has, since the very beginning You control how HARO works.

So – End result? We’re losing the “Anonymous” button, but those who feel they need to can still be anonymous, since the emails will continue to be masked. But – Abuse the privilege, and if our sources tell us you are, you might not be able to use HARO anymore. So like all things, moderation is key – Moderation is the way of the universe.

Any questions? Comments below, or peter@helpareporter.com. We’re doing this because you asked us to – And in the end, we think less anonymous queries are actually better for everyone – both sources, who know who they’re pitching, as well as journalists, who will get double, triple, or even quadruple the query responses if a source knows who they’re pitching.

Thanks for listening, guys – And of course, as always, thanks for using HARO. Nothing we do, could ever be done, without the wonderful audience that is you.