12 Hours of Being Poked and Prodded For A Good Reason

So let’s talk about health for a second.

I think the reason I love doing Triathlons, Marathons, bike races, and the like, is because in my other world, I’m such the anti-healthy guy. I mean, think about it for a second – I run in the morning, but then I have to go to three client cocktail parties, at one drink or more a piece. I bike 40 miles in Central Park at 5am, so I can safely consume half a Ray’s Pizza. I do a half Ironman Triathlon, and congratulate myself with a Triple Whopper.

I live one lifestyle, so I can enjoy the other. And hey, you know what? It works for me. It’s probably the only true level of balance I have in my life.

And that’s why I was so interested (and a bit scared) when OhioHealth’s McConnell Executive Health and Wellness Program invited me out for a full-day executive physical.

First, the disclosures: OhioHealth paid for all of the physical, the tests, the lab-work, and my food while on-site.

Now. I was interested for several reasons. First and foremost, Executive Physicals are getting some new found respect in a world of 11-second doctor visits, where you spend more time filling out your insurance paperwork then the doctor actually spends with you. And it’s not the doctor’s fault, per se – it’s simply the world we live in. I’m not going to get into how to fix that hot mess, but I’ll tell you what I learned about the program, and why everyone should do it – And of course, there’s the kicker – it’s not cheap. Having an entire day devoted to you is expensive. We’ll get into that later. Because I think I’ve found a workaround for some of it.

So… I arrived at the McConnell Heart Health Center at 6:45am, after spending the night in the bungalows right on the property, designed for patients doing exactly what I was doing. First thing they did? Blood pressure, and then I had to strip down into a pair of spandex shorts, and I was thrown in the pod that Mork slept in from the TV show Mork and Mindy. This one though, was much, much more high tech.

It’s called the Bod Pod, and in about a minute, it figured out my body fat percentage (which set the tone for the day, let me tell you…) as well as my muscle mass. Getting locked in a vacuum-sealed pod will give you the most accurate reading, apparently. 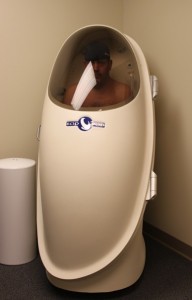 From there, it was blood-work, then a healthy breakfast. (I’d fasted the entire evening prior so the blood work would be accurate.)

After breakfast, a dermatologist examined me, followed by a CT scan of my heart to search for any plaque in the arteries. 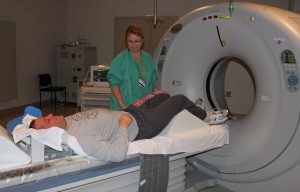 This is how they make really big donut holes.

Then, I met my Doctor, who spent – I’m not kidding – NINETY MINUTES with me, just listening. Asked me questions I didn’t even think of – He took tons and tons of notes, and as I found out later, was even watching what I was doing (Peter did clear his throat often and unwittingly, suggesting allergies were stronger than Peter was aware.)

After that, it was a quick eye test, then a V02 Max, Stress Test, and electrocardiogram. Then a running gait analysis (see video) where they analyzed my stride for how I run. (Turns out I need to stretch a lot more. A LOT more.) Bone density test came next, whoops, I’m forgetting about the Prostate exam – something, I promise you, I can’t forget not matter how hard I try.) A meeting with a nutritionist followed, who analyzed a random day of eating, that I’d provided earlier, along with a ton of other information on the intake form.

By this time, it was mid-afternoon. An hour-long consult with a psychiatrist (still completely insane, nothing new there,) then a final meeting with my doctor, during which I was presented with a 100+ page report – ON ME! All about me, including all the blood work which they’d gotten back and analyzed.

Results? Considering all the crap I eat, the workouts do in fact balance me out – I’m surprisingly healthy. Could I stand to lose 20 pounds? Yes. Are my triglycerides borderline high? (the bad cholesterol?) Yes. Do I relapse on the rare occasion, and bum a cigarette from someone? Sure. But am I unhealthy? Far, far from it. I’m actually in pretty damn decent shape!

And you know what? Simply knowing that, makes me so, so much happier.

So let’s look at two points.

Point one: If you can afford it, go get an executive physical. If the other hospitals that may be closer to you around the world are as good as McConnell, I strongly recommend doing it. I felt like the doctors there actually listened, as opposed to just opinionated without all the information. And that made a world of difference.

But here’s point two: Not all of us are executives, or CEOs, or can afford to have a full-day physical. I get that. And I’m not recommending that everyone should drain their savings account to do it.

Here’s what I discovered from my day under the microscope:

It’s all about preventive action.

I guarantee you, that without all my running, my cholesterol would be through the roof, that I’d be 30 pounds heavier at least, and that I’d probably be the poster child for adult-onset Diabetes. Face it – we live in a world of convenience – quick drive-through burgers, high-fructose corn syrup in everything we eat, and the option to buy a McMeal much, much more prevalent than the option to find a Banana somewhere. It’s the price we pay for “convenience,” as it were.

When I was told no plaque in my arteries, and that I blew over 100% of my lung capacity, I was thrilled – Because until that moment, I didn’t know – Was I healthy? Was I a time-bomb? What had ten years of smoking from high school to beyond college done to me? Who knew.

Here’s the thing. I’m not going to change my entire lifestyle. No one should have to. I’ll still have my Triple Whopper reward after my Ironman. No doubt. It’s what I love – it’s a part of me. But you know what? I won’t have it every day. Will I never bum a cigarette again? I can’t promise you that. Will I renounce of love of the perfect Blue Cheese Olive Dirty Martini? Come on, should that really be a question? But I can promise that I will keep up my workout regimen, and I will continue to “even out the odds” as it were.

I’m sad that we all don’t have access to McConnell, because I learned a ton. But we can ask our doctor for preventive ideas when we go see him or her next time. We can monitor our own blood pressure and keep a journal. We can buy a scale that charts our weight online for us. We can do these things, because we should do these things! We just need to make sure we do. Because if we tip the scales too far in one direction or the other, it’s not gonna work.

What was the most important thing I got out of my day at McConnell?

We could all use a little more of it.