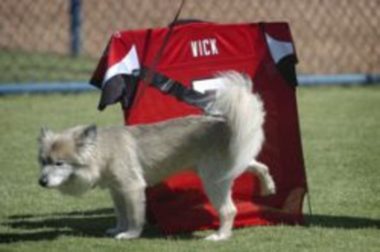 7/29/07 – Smokey takes a break on a Michael Vick jersey from the Atlanta Falcons during “Michael Vick Animal Awareness Day” at the Armada baseball game at Blair Field in Long Beach. The day where fans were invited to bring their dogs to the game was in responce to Michael Vick pleading not guilty to a federal indictment that charges him in a dogfighting conspiracy. The jerseys with a black “X” over the number 7 were set up in the where in the dogs area.
Photo by Steven Georges/Press-Telegram