I Have Seen the Douchebag. And He is (some of) Us.

I woke up this morning, my first night home after a very successful South by Southwest, to a hungry cat at 5:30am. I was exhausted, and pushed her away. Turns out, she wasn’t so much hungry, as she was trying to inform me of a shitstorm brewing in the comments section of a well-written blog post, about how there were way too many douchebags at an otherwise excellent conference. She’s a very smart cat.

The short story – A blog post was posted about someone at a party who yelled at a volunteer. It wasn’t me. However, under the influence of too much tequila, I posted a comment on Twitter inside the TechKaraoke party that was taken totally out of context. I was talking about Karaoke, and from the comment, it was inferred that I was slinging some power to be let into a party. People put two and two together, and assumed it was me. For the record: It wasn’t. I have countless people (both old friends and new friends) who were there and have already set the record straight. I’ve also talked via telephone to the party organizer, Jen Wojcik, and we’ve resolved the case of mistaken identity. I’m a huge fan of her events, but more importantly, I don’t talk down to ANYONE, regardless of where I am or what I’m doing, be it at a party, or the local bodega. That’s simply not me. This paragraph had to be written to give this blog post some context, but this blog post isn’t about me, or what I did or didn’t do.

Please note: Any suggestions I offer in this blog post are directed to anyone who feels they’re worth adopting, INCLUDING ME. I’m calling myself out here too.

Here’s the deal guys. At the end of the day, life comes down to RESPECT. That’s it. Life comes down to respect. I don’t care how big you think you are, or how many “Successes” you’ve had. If you’re not respectful, you won’t be long for this world.

My mom and dad were teachers all their lives, in the working class of New York City. And they taught me respect. They taught me, most importantly, to never forget where I came from. And I hope that I’ve shown them respect by trying to live by that creed. Do I fail occasionally? Hells to the yes. We all do. But it’s bigger than that.

NONE OF US ARE EVER SO IMPORTANT THAT WE HAVE THE RIGHT TO TALK DOWN TO THOSE WHO WE FEEL ARE NOT. 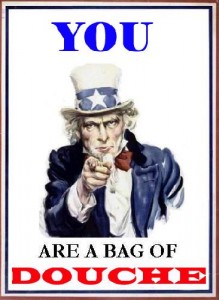 The gist of Thomas Myerman’s blog post was thus: This small event, South by Southwest, has, in a way, become the victim of its own success. When people like Ashton Kutcher show up and ride the Zappos happiness bus, it’s no surprise that the douchebags of the industry will show up, also. Not calling Ashton a douchebag by any means, just making a point.

Myerman simply stated that way too many people showed up at South by Southwest, believing their own hype. As such, this year’s event had several “bad moments,” far more than any other SXSW in previous years.

Ladies and Gentlemen of my industry: I propose a credo: “WE ARE NOT AS IMPORTANT AS WE THINK WE ARE.”

Say it with me.

There is NEVER any excuse for talking down to a volunteer, raising your voice, or putting on airs about how great you are – EVER. Let’s fact it – Doing it at the door of a party won’t help you anyway, because chances are, the person working the door is a volunteer who has never heard of your ego-inflated ass. And yes, your ass looks fat in that ego. There. I said it.

If we want to continue to be taken seriously as an industry, we need to remember that we’re not rock stars. We’re not playing sold out stadiums, and we’re most certainly not curing diseases, or helping mal-nourished kids get food or get healthy by writing a fucking treastise on how you can market your brand better by using FourSquare.

I, for one, don’t want to see South by Southwest turn into a conference no one wants to attend because all the assholes attend it. I saw this happen in 2000 at another massive conference that started out small, at a little hotel in mid-town Manhattan in the mid-90s. By the time it took over the entire LA Convention Center in 2001, it was painful to attend. We can’t let this happen. I for one, will go on record and attempt to do my part to MAKE SURE this doesn’t happen.

I built HARO on a foundation of helping people. In the process, it turned into a good company, a solid company that generates decent revenue. But the core has stayed intact – We, as leaders in the social media space, or hell, even as just users of the tools, need to take a more proactive approach to helping people, and a less active approach to making sure people know who we are.

Because if we continue with the latter, everyone will know who we are – And they’ll go out of our way to avoid us. We can’t let that happen because we our egos have clouded our vision. Our actions, and how they serve other people, are a billion times more important than how we come across. Because if our actions don’t help to serve the greater good, we’ll come across like assholes. We need to remember this.

I’m not going to censor any comments left here. I’ll approve them all, good or bad. Want to say something? Say it below.