In Defense of Being So Goddamn Happy All the Time

By Peter Shankman11/16/2016Business, Business Hacks, How I..., Personal, Self Improvement, Success

Happiness is a choice, as is anger. Time is going to pass, whichever one you choose.

I was flying back from the Philippines a while ago, and was about six hours into my 12-hour leg from Seoul to San Francisco. I was happily writing a blog post, while munching on some ice in my Diet Coke.

On my headphones was “Good Life” (the B.O.B. Remix) from OneRepublic on repeat, (thanks to another happy person, Melanie Curtis for turning me on to that most awesome song,) and I was six hours into a ton of work, smiling all the way through, and subtly bopping to the music the entire time. I couldn’t have been happier.

My seatmate woke up about eight hours into flight, and after getting his bearings (Int’l flights are brain-killers,) looked at me, all happy in my seat, and asked me flat out if I was on something. I give him credit for being ballsy, he was flat-out asking me, someone he’d never met, if I was on drugs. He wasn’t a freak, either — I’d come to find out that he worked in Silicon Valley.)

I assured him I was just high on life, and while I’m not sure if he believed me, it got us talking. He simply couldn’t understand how I could possibly be happy about being on a 12-hour flight, with the time change, and the dehydration, and the annoyances of flying, and the horribleness that, in his mind, was everything that ever happened in this world since the Big Bang. More incredibly to him, I was smiling! (Hell, he’s lucky I wasn’t singing.) 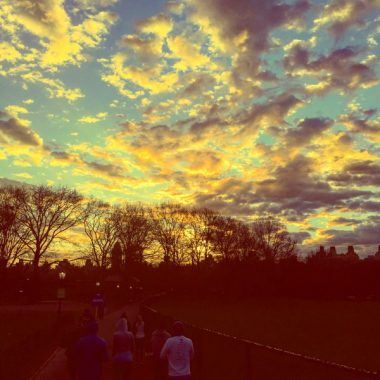 No response I gave him was satisfactory. It almost seemed to get him more grumpy! And just like he couldn’t get through his head that it was possible to be happy on a plane, I couldn’t understand what he was so upset about. Sure, we were on an overnight flight, and would probably be a bit dehydrated and crunchy when we landed, but come on! How freaking lucky are we? We were flying through the air at 600 miles an hour, with the ability to do what we want for a living, let alone the ability to wake up every day, put our feet on the ground, and walk around! Let alone the fact that we’re alive and have the ability to enjoy that, a miracle in itself, something for which I’m thankful every day!

However, he’s not the only one to ask why I’m happy all the time. Family, friends, co-workers, they’ve all asked me from time to time why they never see me angry.

I spent the last few hours of my flight thinking about that — Why is it that so few people have ever seen me angry? And just prior to landing, I figured it out:

I’m not “happy all the goddamn time.” I just don’t see any value in being angry for the sake of being angry.

The majority of people who we think of as “angry” get angry for no other reason than the act of being angry. They let stupid shit piss them off, then waste their time being angry, achieving nothing from it.

Much like regret or gloating, anger is simply a waste of time.

See, I do get angry from time to time. Everyone does. Things happen in this world. But the difference is this: Instead of throwing something or complaining, I try to take the energy I’d use cursing or bitching, and put it to good use. Like almost everything else in my life, this comes down to three things: Choice, time and logistics: Is it more beneficial to me to complain, or would I be better served by translating that anger and doing something useful?

Easiest example for me: Flight delay? Instead of bitching about it, I’ll throw my headphones on, go for a walk around the airport, and hit my daily step goal earlier than anticipated. Any extra activity I do that day is an added bonus!

For me, the best use of anger is exercise. Forgetting for a second about the actual positive chemical changes in your brain when you exercise, think about it this way: Why not turn that anger into a force for your own good? You’re working off your anger in a positive way, and extending your life in the process. And if you really need to think about it, chances are the person you’re angry at didn’t work out today, and you did.

Petty? Sure, but a hell of a lot less petty than being that asshole in the boarding lounge screaming “don’t you know who I am?” at the gate agent, who’s smiling while secretly changing asshole’s seat from 4B to 47F.

Want proof? Watch the below video from Turbolenza, a skydiving team better than I’ll ever be: Notice that there’s not one image of anyone unhappy? It’s impossible to be unhappy after a skydive, or a long run, , or a damn HIIT class — you name it. Simply put, working out, skydiving, whatever turns you on, physically changes your brain. “Runner’s High” really is a thing — Because you actually are high. Dopamine, Serotonin and Adrenaline are wonderful chemicals— And they’re readily available to you, for free, anytime you want them.

Here’s a secret, though: It’s not always easy to be happy. And that’s ok. But the key is realizing when you’re not, then figuring out what the problem is that’s keeping you from being happy again.

Back in 2006, I got dumped. Hard. I was pissed off at anything that moved, blaming everyone and everything for this woman’s obvious inability to see how awesome I was. (sarcasm intended.) It was April of 06. By May, a friend of mine approached me and flat-out told me that I needed to stop being angry. (His actual words, because he’s British, were a little harsher, and involved a word that we in the US consider horrible, but over in the UK isn’t that bad.)

But he got me thinking. And I realized he was right. I was being… that word. And I hated myself for it. So I channeled that anger and hate into action, and spent the next six months training for the 2006 NYC Marathon, harder than I’d ever trained before. My previous marathon time had been over five hours. But it’s amazing what can happen when you figure out a way to channel your anger. My 2006 marathon, to this day, remains my fastest ever marathon, at 3:58:03. And let’s face it, it’s pretty hard to be angry as you’re cruising towards an improvement of over an hour from your last marathon.

I guess it comes down to this: With whom would you rather hang out? The miserable person who lets every single thing bother them, or the person who figures out how to make lemonade out of lemons? With whom do you enjoy spending your time more? I know my answer.

Another benefit of focusing on being happy: It drives angry people simply insane, and throws them completely off balance. There’s nothing I love more than being nice to someone who’s seriously pissed off. Examples abound, but my favorite is to respond to a hater’s email by asking what’s getting them so upset, and more importantly, how can I help them? 99% of the time they won’t reply. When they do, though, you get a golden opportunity to change someone’s life. Forgetting about the good karma aspect of that, it’s just a decent thing to do — You never know what’s really bothering them — Chances are it isn’t you, and offering help can massively impact their world for the better.

Simply put: Life is too damn short to be miserable. Things are always going to happen in your life that have the potential to piss you off. How you choose to handle them will define the legacy you’re going to leave over the long term, and, more relevant to now, will determine the kind of life you lead, and the people with whom you associate. Think about it — If the majority of the people you know tend to be angry all the time, well, what does that say about you?

The question isn’t “why am I so happy all the time,” but rather, “what do you get out of being so angry?” Both are choices, and time is going to pass regardless of which one you choose.

So the next time you see me smiling through a flight delay, or singing as I’m running through Central Park, or even taking a subway delay with a grain of salt, I encourage you to join me. Life’s too short not to.

I preach happiness all the time in my amazing community of entrepreneurs — I’d love for you to be a part. At the very least, follow me on Twitter, Facebook or Instagram— I promise, I’ll make you smile at least once a day. Because, let’s be honest — who wants to follow the person who’s always miserable?